Rock Anchor:
​Rock Anchor is type of modern foundation system developed to install the anchors in Solid Rock or any Soil Media or combination of both. This system is an ecological sound system as it requires no excavation of soil, no removal of soil, no explosive material required during its installation of anchors in to rock. The Rock Anchoring System Components, upon their placement, directly transfers the applied design forces directly into the surrounding media of Rock. The System can be designed and installed to handle any intensity and type of loading placed upon it and is only limited by the strength of the surrounding media itself. It is easily installed with a minimum amount of time, labour and equipment. Once installed, the System can be easily tested to its design/ultimate load bearing capacity and is ready for immediate use with known installed structural integrity.
​
Anchor Design, Installation & Testing Procedures:
Pre checks before Design and Installation:

As with other rock anchors, the design of the System normally requires core sampling that identifies the consistency, type and strength of the load bearing capacity of soil media. The position/depth of the System is determined. The required design loading of the rock anchor system will determine the bar size required. Standard sizes available range from diameters of 25 mm to 60 mm with minimum ultimate strengths of 127.5 to 778 kips or 500 to 1000 N/mm2. The hole size required for the installation will normally be 25 mm greater than the bar diameter. Core sampling ideally would be taken at precise location the System is designed for installation of Rock Anchor. Upon withdrawing and inspecting the core samples, the permeability of the Soil and Soil Bearing Capacity, materials that the soil is made with are determined and the maximum loading capacity of the soil is determined. In addition to this test, the depth of the ground water table has to be calculated in order to determine the uplift pressure generated because of Water Table. The uplift pressure that is generated tries to lift the bar installed in to rock using Chemical grout which as a result will result in tensile load.

Design of diameter of bar and Embedment depth for Rock Anchoring:

After conducting test on the soil strata and determining its properties, necessary design is done by Geotechnical engineer in determining the Maximum Soil Bearing Capacity and the load that the soil/Rock strata can withstand.

The required design load for a constructing foundation should always be less than the load that the soil strata can withstand.

Calculation of Steel Failure of Rebar:

To calculate the Embedment depth required:

The Embedment depth required to withstand the required design can be determined by the bond strength between the rebar installed and the soil strata. This mainly depends on the Bond strength of the Chemical grout used for fixing in the soil with rebar. The Ripple R Fix (Pure epoxy Resin based chemical) provides good bond strength to get the rebar fixed with the soil strata. The Embedment depth required for obtaining the design load is calculated according to the following formula.,

d = Diameter of rebar in mm.

The required design load distributed per square meter can be sufficed by the number of rebars grouted in the square meter with minimum axial spacing between two rebars. 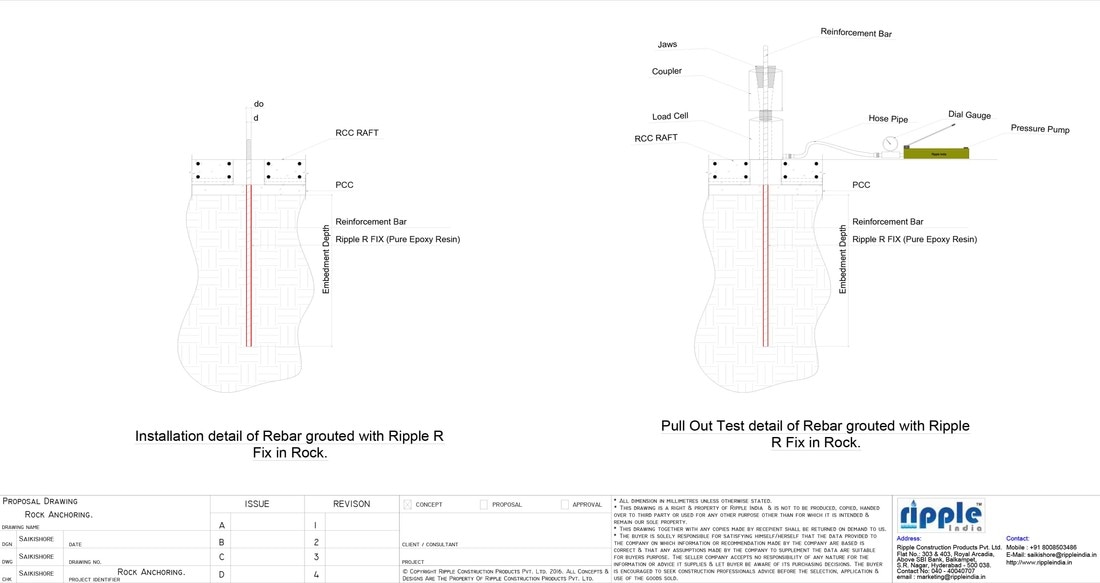